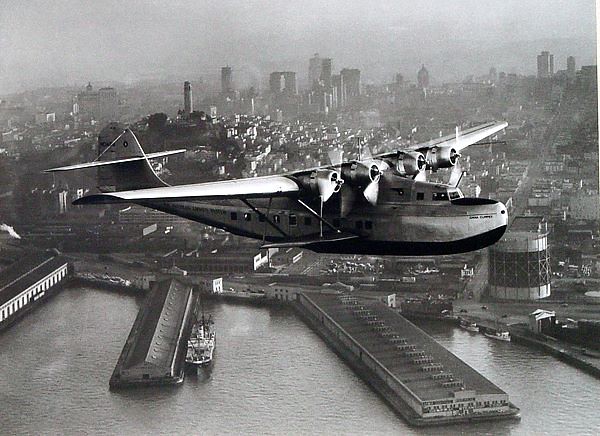 DUE TO CHANGES IN ALAMEDA COUNTY RESTRICTIONS THIS EVENT IS NOW CANCELLED AND WILL BE RESCHEDULED AT A LATER DATE. THANK YOU FOR YOUR PATRONAGE!

Come visit the museum on Sunday the 22nd of November and relive the historic days of Pan American Airways, known as “Pan Am” and the China Clipper. An excerpt below from the Wikipedia site discusses the Boeing 314 “China Clipper”. Some see the historic artifacts and enjoy your local museum!  Pan Am originally flew out of what is now the former NAS Alameda, before operations were moved to Treasure Island, then shut down at the outset of WWII.

Six large, long-range Boeing 314 flying boats were delivered to Pan Am in early 1939. On March 30, 1939, the Yankee Clipper, piloted by Harold E. Gray, made the first-ever trans-Atlantic passenger flight. The first leg of the flight, Baltimore to Horta, took 17 hours and 32 minutes and covered 2,400 miles. The second leg from Horta to Pan Am’s newly built airport in Lisbon took 7 hours and 7 minutes and covered 1,200 miles.[31] The Boeing 314 also enabled the start of scheduled weekly contract Foreign Air Mail (F.A.M. 18) service and later passenger flights from New York (Port Washington, L.I.) to both France and Britain. The Southern route to France was inaugurated for Air Mail on May 20, 1939, by the Yankee Clipper piloted by Arthur E. LaPorte flying via Horta, Azores, and Lisbon, Portugal to Marseilles.[32] Passenger service over the route was added on June 28, 1939 by the Dixie Clipper piloted by R.O.D. Sullivan.[33] The Eastbound trip departed every Wednesday at Noon and arrived at Marseilles on Friday at 3 pm GCT with return service leaving Marseilles on Sunday at 8 am and arriving at Port Washington on Tuesday at 7 am. The Northern transatlantic route to Britain was inaugurated for Air Mail service on June 24, 1939, by the Yankee Clipper piloted by Harold Gray flying via Shediac (New Brunswick), Botwood (Newfoundland), and Foynes (Ireland) to Southampton.[34][35] Passenger service was added on the Northern route on July 8, 1939, by the Yankee Clipper.[36] Eastbound flights left on Saturday at 7:30 am and arrived at Southampton on Sunday at 1 pm GCT. Westbound service departed Southampton on Wednesday at Noon and arrived at Port Washington on Thursday at 3 pm. After the outbreak of World War II in Europe on September 1, 1939, the terminus became Foynes until the service ceased for the winter on October 5 while transatlantic service to Lisbon via the Azores continued into 1941. During World War II, Pan Am flew over 90 million miles (145 million kilometers) worldwide in support of military operations.[11]

Pan Am’s flying boat terminal at Dinner Key in Miami, Florida, was a hubof inter-American travel during the 1930s and 1940s.

Pan Am also used Boeing 314 flying boats for the Pacific route.  Pan Am flew to Singapore for the first time in 1941, starting a semi-monthly service which reduced San Francisco–Singapore travel times from 25 days to six days.

This site uses Akismet to reduce spam. Learn how your comment data is processed.